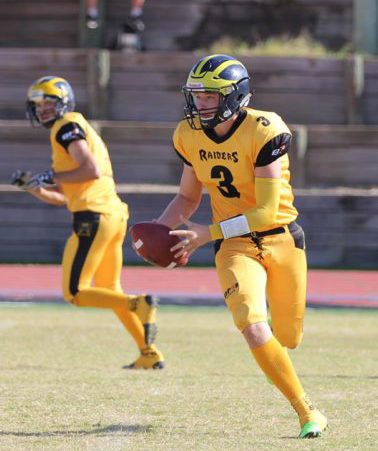 On Saturday 9th April 2017 the Junior Australian Gridiron League kicked off in Queensland. With three junior Wolverines having the opportunity to travel and represent Western Australia, all for the first time, it was a great opportunity for the young guns to show what they were capable of.

The three players selected were 4 year junior Wolverine and 2nd Year Quarterback Kyle Webzell, 2nd Year Running Back Alex Endall and Rookie Running Back Uriah Faamasino. All three showed incredible talent and potential in trials and earned themselves a well deserved spot on the state roster, and none were going pass up the opportunity to put their skills on display on a national stage.

In their opening game the Raiders faced a determined SA Sharks team who had no intention of rolling over despite being the underdogs in the match.

The Raiders took a little time to find their feet in the opening quarter however the scoring was soon opened up by the Wolverine’s own Alex Endall breaking a run for the score on just his second play on the field.

The defense came on and held strong and wasn’t long before we were all feeling a sense of Déjà vu with Endall again breaking a run into the endzone taking the Raiders two scores ahead.

The Raiders weren’t finished there with the D holding staunch once again before Liam Crookes (Rockingham Vipers) came out and hooked up with his Vipers teammate Nico Burns for his first passing TD of the tournament.

The Raiders domination of the game continued into the second quarter with Kyle Webzell stepping in for his first taste of Quarterbacking at this level. Kyle took a couple of snaps to get his rhythm but once he found it he barely missed a beat, orchestrating a beautiful drive and taking the Raiders to their next score with a pass to the Vipers Lachy Pink on his first ever drive under centre for the Raiders.

While the second half slowed down in the scoring front Kyle and Alex both added another score to their tallies topping off a great performance. A couple of momentary lapses and the sheer dogged determination of the Sharks never waned with them finally breaking through the Raiders for two scores late in the game.

Game 2: WA Raiders vs The All Stars

As a new team comprised of majority players from North QLD & Tasmania the All Stars were always going to have a tough time against an experienced and powerful team like the Raiders.

This didn’t concern the All Stars however who came out fighting tooth and nail and gave the Raiders a pretty major scare who going into halftime only had a 7-0 lead.

The second half picked up significantly with Alex Endall again proving too much for the All Stars Defense and putting in more scores, working with Uriah Faasamino and Mitchell Crookes (Rockingham Vipers) in the backfield to continue to work over the All Stars Defense on the ground. The game was punctuated with passing scores from Liam Crookes to Nico Burns and Mitchell Crookes. Kyle Webzell stepped up at quarterback and drove the length of the field only to be denied on a 3rd and goal play forcing the Raiders to kick a field goal.

The game was called off with 9 minutes remaining due to a serious injury sustained by a WA Raiders player who required medical attention.

This game was highly anticipated and eagerly watched by all involved, with the result having significant impact on the final standings.

The game was a stalemate of tough defense, both showing a bend but don’t break attitude and neither side showing any signs of allowing a breakthrough.

Eventually the NSW Wolverines broke ranks and scored the only points of the game, making the final round against the Queensland Sundevils a must win for the Raiders.

In what was probably the most anticipated game of the entire tournament the two highest rank teams in the country going into the tournament faced off in a must win for both teams.

The Sundevils had looked incredibly strong the entire tournament showing no weaknesses and allowing not one point in their first three games.

Unfortunately for the Raiders this wasn’t about to change with the Sundevils performing in every facet of the game and proving their dominance again.

Overall the tournament saw great individual performances from all three junior Wolverines-Alex Endall, Kyle Webzell and Uriah Faamasino. It was a pleasure to watch all three, who have grown and matured in front of our very eyes and played at a level above for the entire week.

Alex Endall who not only scored 5 touchdowns for the WA Raiders while leading most of the tournament in rushing yards, but as a result of his performance was selected to the Junior Outback – The Junior Australian Gridiron Team training squad for the opportunity to represent Australia in their next international rounds.

Alex said, ‘Playing for the WA raiders was a great experience in terms of football and the people I met. I had to learn 11 a side football which was a whole new intensity from the 9 man game I am used to. The players from the other Gridiron West teams were great to get to know and play alongside and the coaches have taught me a lot that I can’t wait to bring back to the Wolverines. From my performance at nationals I’ve been selected for the outback squad. I am incredibly grateful to have the opportunity to play more football amongst some of the the best junior players in the country, as well as see how other countries perform in gridiron.’

West Coast Wolverines Vice President Ben Giff said, ‘It’s great to be able to watch these young men develop and learn. Their selections and performances are as a direct result of the hard work they have put in and determination they have shown. We at the Wolverines are proud to have played our part in developing these guys into the players they have become and look forward to working with them in the future to help them further develop their careers and seize future opportunities, as well as developing all of our players at both junior and senior levels who have now seen that this opportunity is well within their grasp if they are prepared to work for it.’