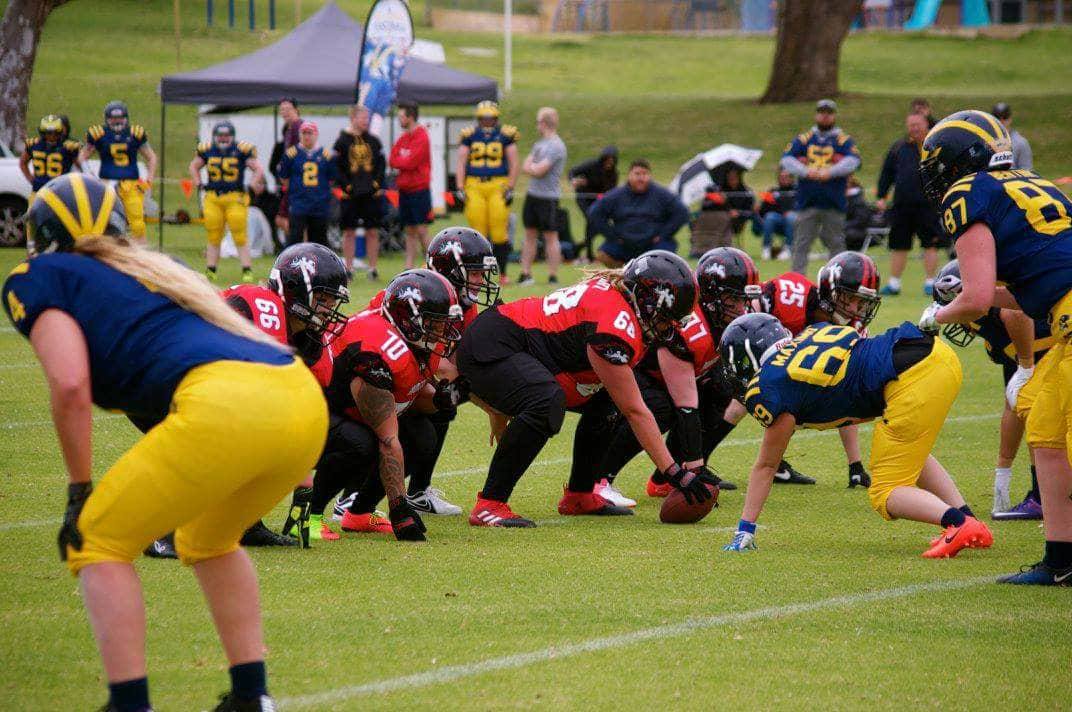 On the 7th October 2017 the Joondalup based West Coast Wolverines kicked off their 2017/18 Gridiron West campaign hosting the Perth Broncos at Forrest Park, Padbury.

The day saw a first for both teams with both the Wolverines and the Broncos fielding three squads for the first time in their history, with performances by the juniors (under 19’s), men’s and women’s teams.

With over 100 supporters in attendance despite the early threat of Spring showers both teams were keen to set the tone for the season early.

The day kicked off with the juniors facing off. The Broncos jumped to an early lead showing their experience over a Wolverines team made up primarily of players having their first taste of gridiron.

Unfortunately the Wolverines never clawed back the lead despite a strong performance overall, with stand out performances from the team’s two state players Quarterback Kyle Webzell and Running Back Alex Endall, with the Broncos eventually running out victors with a 40-20 score line.

Next up came the first meeting between the leagues newest additions in the form of the women’s teams. This was highly anticipated with no one sure exactly what to expect from this match up.

To mark the occasion Scarborough MLA and Former Deputy Premier Liza Harvey attended to conduct the coin toss, showing her support and providing the ladies some words of encouragement for this historic match up.

Despite none of the Wolverine’s players ever having played gridiron before 10 weeks earlier the ladies came out firing on all cylinders, jumping to a 6 point lead with a touchdown on just the third play of the game.

The Broncos wasted no time striking back levelling the score within the next two drives. Both teams failed to convert the extra point and entered the second half in deadlock at 6-6.

The second half started much the way the first finished with both teams showing a dogged determination and staunch defence remaining scoreless until late in the 4th quarter when the Broncos finally too advantage of a lapse in concentration on the part of the Wolverines special teams and returned a punt to the endzone for the score. The conversion took the score to 14-6 in favour of the Broncos with very little time left on the clock.

The Wolverines never gave up though and the game went down to the wire with the Wolverines narrowly missing out on levelling the score in the dying seconds.

The third and final game saw the men take the field. The battle between these two teams is always intense with neither team wanting to give an inch. The Broncos experience and depth of numbers simply proved too much for the Wolverines however who struggled to get momentum going, eventually falling to the Broncos in a 36-0 loss.

Overall the day was a great success despite the results for the Wolverines.

Wolverines Vice President and Women’s Head Coach Ben Giff said, ‘It’s been a fantastic day and a great achievement realised in seeing all three squads performing out here today. I especially couldn’t be prouder of our ladies today who finally got their first taste of American Football. All three squads performed well but we recognise that there is work to be done across the board to
ensure we have a winning season’.

Kellie Hopkins, Broncos player and Gridiron West Director of Women’s Football said, ‘After months of hard work and blood sweat and tears from all involved it was amazing to see such a great display of American Football today. We’d like to say a special thank you to Liza Harvey for coming down to show her support today. It’s important that we make sport accessible to all factions of society and Ms Harvey recognises and supports this initiative to make our great sport available to the women of WA as well’.

If you are interested in finding out more please visit www.westcoastwolverines.com.au or search West Coast Wolverines on Facebook.

The Wolverines’ next game will see all three squads take on the Curtin Saints at Forrest Park, Padbury with the juniors kicking off at midday, women at 2pm and men at 4pm in what’s set to be another great day of gridiron.