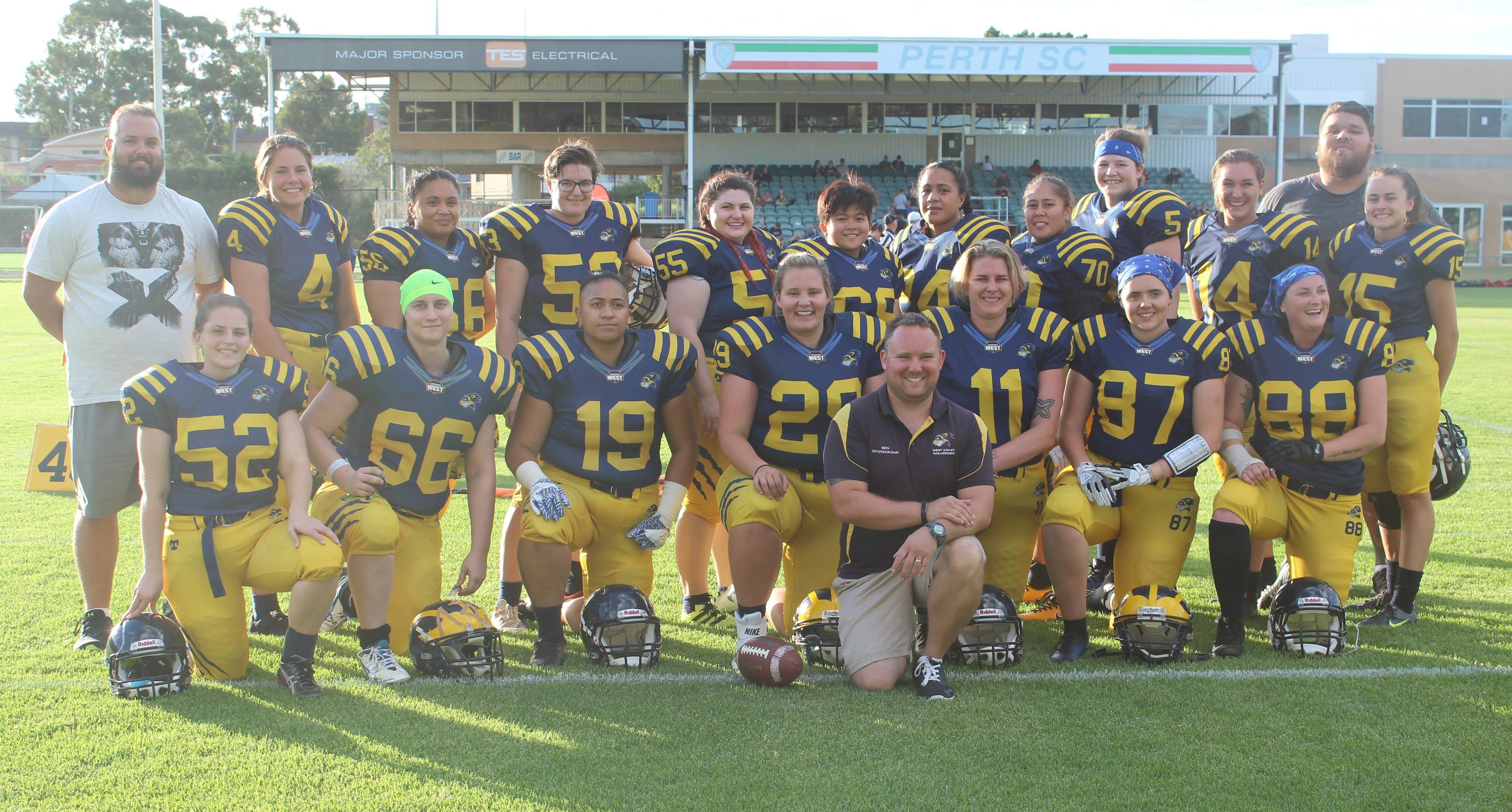 With the first season of women’s gridiron in Western Australia over we reflect on how far the players have come and look forward to WA’s first ever representation in the Women’s national competition to be held here in Perth.

Rewind to May 2017. Twelve people, representatives from across Gridiron West sit around a table in a meeting room in the Department for Sport and Recreation. One of those twelve is Kellie Hopkins who has recently moved to WA from Queensland. Kellie had played tackle football in Queensland and was missing it since moving to WA so came with a proposal to the Gridiron West Board – the development of a women’s division. While there were mixed reactions to the idea and a lot of questions the motion carried on one condition – Kellie was to set the league up as the Women’s Director with the help and support of coaches from the teams who had agreed to be part of the launch. And so the Women’s division was born.

Fast-forward to January 2018 and we found ourselves watching the first ever Women’s Gridiron West final, a hard-fought battle between the Perth Blitz and Perth Broncos.

In the time between these two events we’d seen around 120 women come on board to try the sport across the Metro area. For 99% of these the extent of their ‘experience’ was from watching football on TV, playing Madden or occasionally catching the Superbowl. But what they lacked in experience they more than made for in heart, determination, willingness to learn and a desire to do their absolute level best in a new sport.

Ben Giff, Women’s Head Coach at the West Coast Wolverines, recalls the first training session. ‘I stood there with 6 girls in front of me. Some had come from AFL, rugby, etc, and one said she’d never played ANY sport before. I thought right then, this is going to be tough. But when I spoke to the girls they were so keen, hanging on every word as you explained the game and tried to get them to understand some of the basic terminology. They were a blank canvas as far as football went!’.

As the preseason went on the numbers increased, with the Wolverines eventually reaching 19 registered players turning out twice a week for training.

‘The backgrounds became more diverse- we still had the AFL and rugby, but we had girls from netball, volleyball and soccer coming down to try out. Girls who had no experience of a contact sport’ explains Giff. ‘It was pretty daunting at times I won’t lie. I had nights where I’d think what have I signed up for! But one thing that was absolutely unwavering was the hunger to learn and improve and as a coach you can’t ask for much more than that’.

And learn and improve they did. The first game day came and friends and family were all stood on the sideline not really knowing what to expect. The players were nervous but excited. It was a tense time. But then came the opening kick-off, the first carry, the first pass, and the first score and the nerves seemed to ease and excitement kicked up a notch.

As the season went on Giff recalls standing on the sideline at halftime during a game. ‘I was standing there and turned to my assistant coach and said, listen for a minute. They’re talking football. Like, really talking game plans, strategies and critiquing the game. This is amazing. I stood there for a couple of minutes slightly awestruck with what I was seeing. Girls that a few months ago had never picked up a football were sitting here talking strategy. Breaking down the game. I’m not going to lie, it was a proud moment as a coach!’.

The season went on and the Wolverines finished with a 4-4 record securing a place in the semi-finals against the Perth Broncos. Whilst they were unsuccessful in making it through to the finals no one felt that it wasn’t a successful season.

‘As I stood there looking at the girls, who had played their hearts out I couldn’t be disappointed. We hadn’t just had a successful first season of football; we’d made a family. Every member of the team regarded the others as sisters. 19 people who barely knew each other a few short months earlier were now as close as you could be. It was amazing to watch and a testament to the girls’.

Comments were thrown around during the season like, ‘Wow they’re playing proper football’ and ‘They’re actually pretty damn good!’ which for a first-year league is always good to hear!

The first season of Women’s football in WA clearly demonstrated a desire to play contact sports and particularly football for women. And it’s not over yet. 2018 sees the first ever time that WA will be entering a women’s team into the Women’s Australian Gridiron League (WAGL) competition. The competition will see state teams from across the country come together in Perth to compete.

‘This is not just a fantastic opportunity for the girls to compete at a higher level, against players who have been playing significantly longer than most in WA have, but it will be great exposure for the division here in WA’ says Giff.

With the tournament running between 28th May and 7th June 2018 the teams are training and preparing now for what will no doubt be a tough challenge for the Raiders Ladies.

If you would like to support the team, or any of the girls taking part in the WAGL with donations or fundraising please get in touch and we would be happy to discuss the options available.