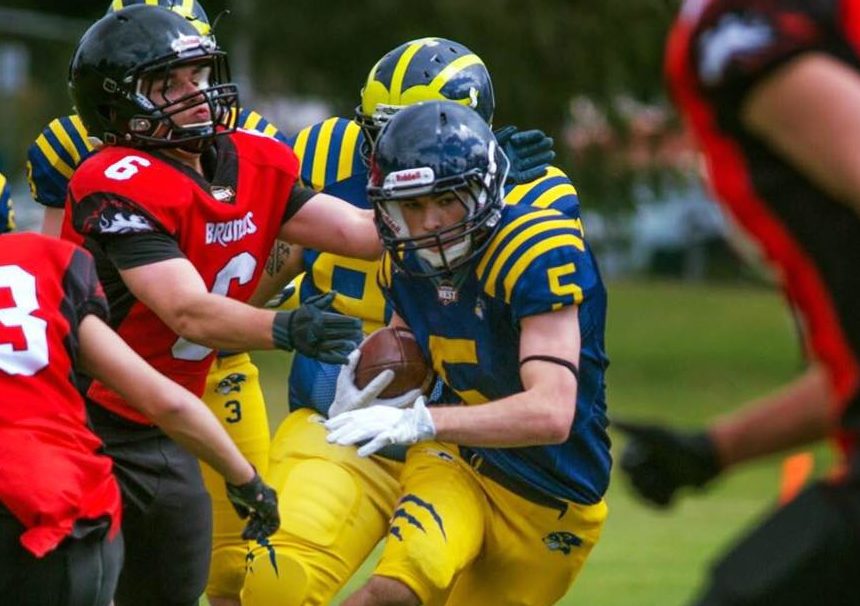 Junior Wolverine and Merriwa teen Alex Endall secured his place in the Australian Outback squad and is heading to Mexico to compete against some of the best in the world. So how did he get there?

In July 2013 the Padbury based West Coast Wolverines held their annual open training camp. It’s a great opportunity for people who wanted to try the sport to come down and get a feel for the game.

Around the same time Alex Endall, a 14 year old from Merriwa was searching the internet for a new sport to try. Alex told us, ‘I’d been a fan of American Football for years, watching it on TV and the internet whenever I got the chance. I had no idea there were teams in Australia, but one day I thought, hey why don’t I have a search online. I found the Wolverines and convinced my mum to take me along to try out’.

Alex turned up to the first camp and was sold. He immediately fell in love with the speed, the rush and the technical aspects of the game. But he knew he faced an uphill challenge. Alex wasn’t the biggest 14 year old and the junior division age ranged from 14-19 years old which meant he was playing against young men significantly bigger than himself. But this didn’t deter him even for a second. He decided there and then that he would train, study and work to make his mark on the sport and become the best athlete he could.

As the first season came towards it’s end with Alex playing in various positions he decided to approach his head coach, Ben Giff, and ask him if he could try out at running back. The answer was not what he wanted to hear. ‘No, not right now’.

Coach Giff explains, ‘It wasn’t that I didn’t want Alex to play running back. I could see the potential with him- he was fast, keen and agile. But I explained to him that he wasn’t ready. He was small, ran too high and hadn’t developed the vision to keep himself out of trouble yet. In my mind it was dangerous in that first season for him to play running back as he could have been seriously hurt’.

But unlike many teenagers Alex was not put off by this initial knock back. ‘I understood where coach was coming from. He explained the reasons to me and it made sense’ explains Alex. But Alex’s response to this showed a maturity and strength of character that instantly impressed Coach Giff.

‘Alex turned around without missing a beat and said, what do I need to do to be ready? I was super impressed that he was so keen to work at it so I gave him a list of things I thought he would need to work on to be ready for the next season. And off he went’.

Alex finished that season and left with a determination to do everything that his coach had told him. He trained, he worked on footwork, he studied film, he practiced ball handling and got into the gym. Alex developed a new love and respect of the game and the position of running back. Sitting for hours at a time studying film of Walter Payton, Barry Sanders and other great running backs throughout the years.

‘Alex came back for the new season with a fire and determination you rarely see at this level of sport’ explains Coach Giff. ‘If I’d told that kid to run into a wall as that would improve his play he would have done it. Nothing was going to stand between him and being the best running back he could be’.

And sure enough the hard work and determination paid off. That season Alex had a breakout season at running back earning himself the Offensive MVP for the season and drawing increasing attention from the state coaching staff.

That led to Alex’s next step in his journey. After trials and try-outs Alex was selected to play running back for the WA Raiders state squad. Alex travelled with the squad that Spring to Queensland to compete against teams from across the country. And despite coming up against the best the country had to offer Alex continued to strive and impress. Alex finished the tournament as the leading scorer drawing a significant amount of attention from the National coaching staff.

As a result of that performance Alex was invited to try out for the Australian Outback Squad. This meant again flying to Queensland for a 5 day live in camp and trials. Alex was competing against the best the country had to offer. ‘There were 100 players competing for 45 positions so there was no time to relax. You had to be switched on every minute of every session and you had to impress every opportunity you got’ Alex explained.

And impress he did. As a result of his performance, hard work and work ethic Alex was selected to the Australian Outback A Squad for the Junior World Championships being held July 2018 in Mexico.

‘It’s amazing and such an incredible honour to be selected to represent my country’, Alex had to say about the opportunity. ‘I never could have imagined 3 years ago that I’d be in this position, playing a sport I love against some of the best in my age group from around the world all while representing my country in Mexico!’.

Alex will be travelling with is 44 team mates to Mexico in July to compete on a world stage against under 19’s from teams including the USA, Mexico, Canada, South Korea, Great Britain, with more teams yet to be confirmed. Not only will he be competing against some of the best players at his age in the world he will be watched by thousands of people worldwide via live stream and get exposure to high school and college scouts from the US.

Coach Giff explains, ‘It’s an incredible opportunity for Alex and all of the guys selected for the Outback Squad. To get experience playing at this level, against this kind of talent and being watched by the coaches that will be following is the kind of opportunity a lot of amateur sports people can only ever dream of. And I know that Alex will not waste a single second of the opportunity’.

Alex hopes that this is another stepping stone in the pursuit of his ultimate dream. ‘I’d love to go to a US college and ultimately play in the NFL. I’m realistic that it’s a big dream but I’m going to do everything I can to go as far as possible with this sport’.

And the opportunities are there with two teens from WA recently being awarded college scholarships in Kentucky to play and study. Ben Metcalfe and Liam Crookes both Gridiron West Junior division graduates are both heading off to Campbellsville University, Kentucky to compete in the NAIA division all while having their studies paid for.

‘Seeing guys I played against and alongside going off to do things like that encourage me to keep working because there is a chance of making it’.

And anyone who knows Alex knows if anyone can make it, it’s Alex.

If you’d like to support Alex’s fundraising for his Australian representation please contact the West Coast Wolverines to discuss how you can help.

If you think you have what it takes to be the next big thing on the Australian Gridiron scene get in touch and see how you can get involved!